Eggplant with garlic and mint

Just like zucchini and tomatoes, this eggplant recipe is very handy, it works well as anything (antipasti, salads, pasta…) and it is effortless to make. A basic preparation, that can be eaten with bread or go into an assortment of other recipes, as is the case of the Mafioso, pasta shaped like small tubes in tomato sauce, this eggplant (that she slices into small cubes instead of slices) and smoked ricotta, which is the main attraction from Dona Helena, at Taormina Restaurant. 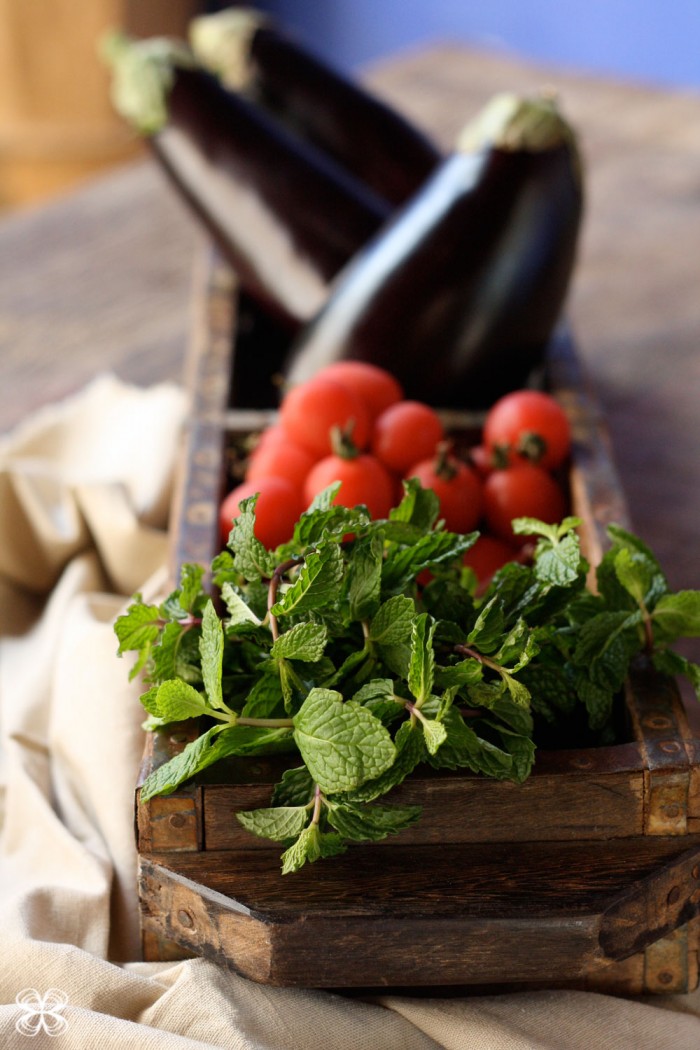 I love it; I always had it elsewhere, but could not get it right at home, until I learned the trick for the eggplant to get crispy and dry (in a good way!). And this is the trick I want to share here with you, and once you master it, you can repeat again and again and even innovate in its use!

And just like in the zucchini recipe, simplicity rules in this one too: eggplant + garlic + mint leaves and olive oil – this is the whole list of ingredients you have to buy to prove, once and for all, that less is always MORE! 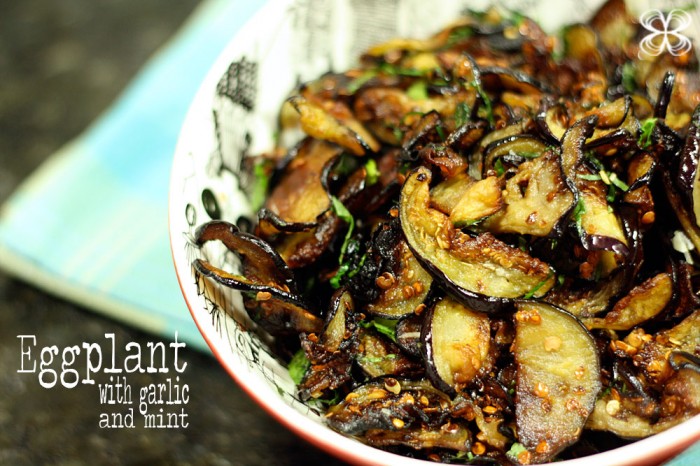 The trick is to dehydrate the eggplant before sautéing it in olive oil. If you don’t do that beforehand, when you throw it into the olive oil, it’ll release too much liquid and get soggy, very different from the result we’ll have here, a crispy and flavorful eggplant.

Cut the eggplants (with the peel on) in fine slices. I usually cut the eggplant in half lengthwise and then I cut it into half circle thin slices. 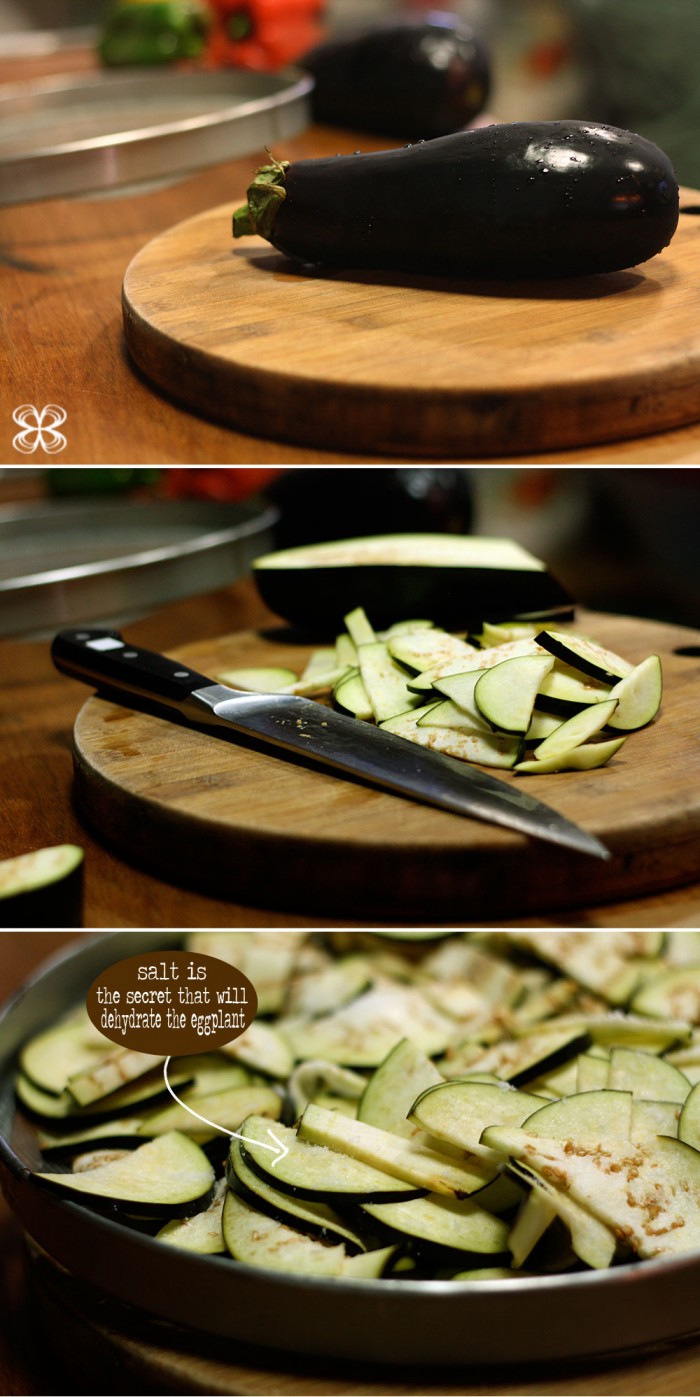 Sprinkle the slices with salt and put them on a sieve to release all their liquid. I add a plate and some weight on it to aid the process.

Hint: having a stone in the kitchen like the one in the picture, helps A LOT. It’s a wildcard and it always saves the day whenever we need a weight to help in the making of something or even to put in a soup bowl from the oven (and keep the temperature of the soup during winter), but I’ll teach that to you later.

For now, choose a good stone and leave it on the sink for future use (and if it’s a stone with a story, so much for the better, this one I got from my cousin Fausto, in Chapada dos Veadeiros, and it’s been following me for a few years). 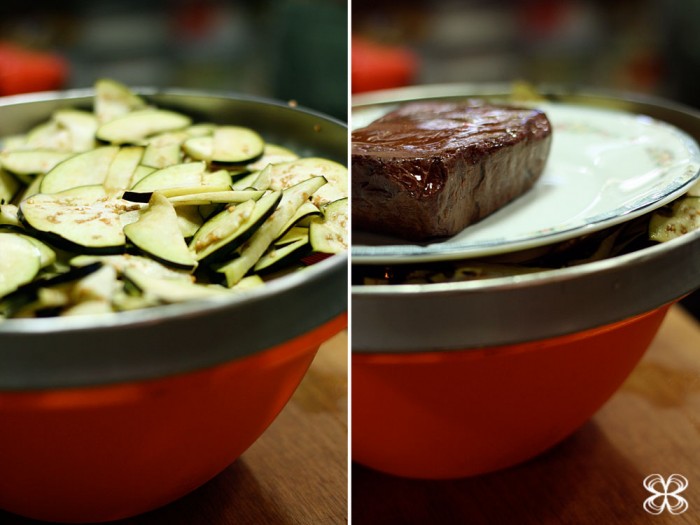 As we wait for the eggplant to dehydrate (about 30 minutes should do it), thinly slice the garlic. Since we’re using raw garlic, be careful not to overdo it, half a clove is enough, any more than that might leave only the taste of garlic.

As you wait, you can also start the chiffonade of the mint leaves, which is the process of cutting leaves into long thin strips. You should get very thin strips of mint, just like in the picture!

After the 30 minutes, remove the slices of eggplant from the sieve, squeezing them with your hands to remove excessive liquid. 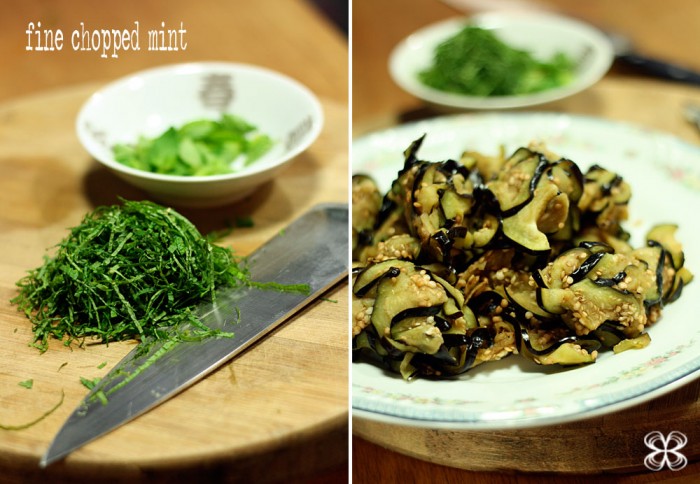 Warm up the olive oil (enough to cover the bottom of a non-stick frying pan) and add the slices of eggplant to sauté them in the oil, mixing them delicately. I like them to be really golden, almost burned, because I love the intense caramelized flavor, but feel free to remove them earlier, if you prefer.

Important: sauté them in small portions one at a time, otherwise they’ll release too much liquid. I divided this amount of eggplants in two portions.

Let them sit on a metallic sieve (it can also be paper towels), and then add the chiffonade mint leaves and the thin slices of garlic.

There’s no need to add salt after they are done. All the salt used in the dehydration is more than enough.

I told you it is really handy, right? I’m going to write another post in the future with the several applications of these delicious slices of eggplant.

Bon appetit, and have a great Carnival!

This dish was an entrée of a lunch we had with our friends Telminha and Gui. The excuse for our lunch was to drink some special wines, the kind of wine we buy and set aside in the cellar for a special occasion. And nothing is more special than enjoying great wines with great friends.

We started with a Spanish red from Ribeira del Duero, an Alión 2006 that sat for almost a year and a half in my cellar. It was Verônica who recommended me Alión, she’s both a drinking and a working friend. The wine is produced by Bodegas Alión, company founded in 1991 by Vega Sicilia, with Tinto Fino (Tempranillo) grapes, aged in young French oak barrels. Despite being relatively young, it had very softened, but noticeable tannins, very good structure, complex odors, with plenty of red fruits and wood and a long, persisting finish. It should be drunk after 3 to 5 years, but it is able to age for up to 20 years. It was to die for!

Next, keeping quality high, we popped a Brunello di Montalcino, which owed nothing to the Spanish. Brunello was the first Italian wine to get the DOCG grading, the highest category among Italians, given to wines with very strict production rules. It is also a wine with great capacity for storage and aging. Less effusive than the Alión, it was rounder and more balanced with the main course, a beautiful pasta with tomato sauce and mini meatballs that Leticia will post here in the future.

After these two, we didn’t even consider opening another one; there was no wine in my cellar that was up to the task. And we got a marvelous fulfilling sensation, because these wines deserve to be enjoyed with sobriety, so that you don’t miss any details or memories. Cheers!

Yummy, this eggplant with mint leaves and garlic and my Middle East mood go splendidly together! And with a versatility touch, Karina Buhr is a delicious pairing up!

And before being versatile, she’s original. Originally from Bahia, she grew up in Pernambuco, where she participated intensely in the musical and cultural melting pot that rose in the beginning of the 90s and, since 2003 she lives in São Paulo, where she joined the drama club Teatro Oficina Uzina Uzona, featured in other artists’ records, artists such as Anelis Assumpção, Mundo Livre S/A, Cidadão Instigado, etc…

She has released two other albums (“Eu menti pra você” e “Longe de onde”) and her band is a powerful one, with Bruno Buarque on electronic drums and rhythm, André Lima on keyboards, Guizado on the trumpet, Mau on bass, Edgard Scandurra and Fernando Catatau playing guitars.

She’s a good friend of some people that are very close to me, and I really want to meet her. Not only because I love her music, but also because I fell in love with the action launched for Mother’s Day 2012, Sexo Ágil. She and a group of women were topless to discuss the hypocrisy of those who criticize other people’s burka but who hide their own body. She told TPM magazine in March 2012: “Brazil is a very sexist country (both men and women), that has a pompous speech on the burka of others, but that can’t look at their own backyard.”

To listen while the eggplant dehydrates: Cara Palavra, a nice rock and roll, and a video recorded in Morocco:

Then Nassiria and Najaf, to take your breath away and inspired by the bombing in Bagdad in 2003, in which she tells the story of two children:

Next the fun Ciranda do Incentivo:

And finally, to taste the dish you just made, Plástico Bolha, which play my mantra, with this incredible video I found with her and Teresa Cristina!):