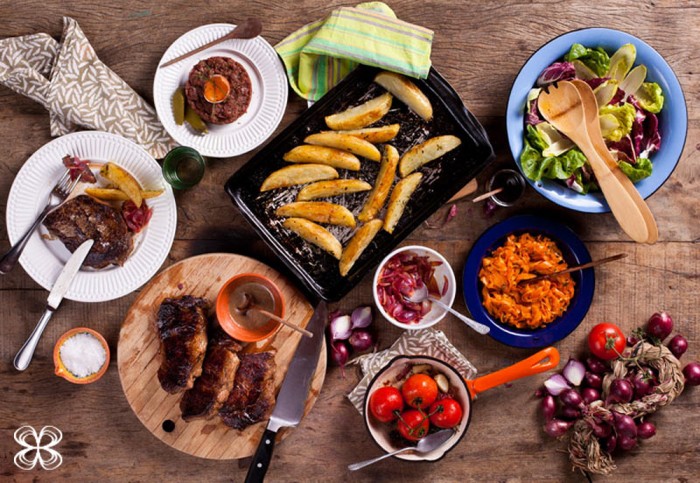 “I hate reality, but it is still the best place to get a good steak.” (Woody Allen)

A dear friend, Jean Philippe, is working with Bonsmara cattle breeders and asked me if I wanted to have a tasting with some cuts. Of course I said yes, especially after he enthusiastically described the meat quality. I also knew I’d receive a quality product since this friend of mine, as most Frenchmen, cooks, loves to eat and has great taste, even after discounting his bias as a salesman. And furthermore, my reference for good meat was, so far, the Uruguayan premium short ribs from El Palenque, in Montevideo, as I said before.

When talking to Larissa, my cooking partner, we defined what to do and which cuts we would rather work with. On the scheduled date, we received the meats we ordered and a few others that Jean wanted us to try. Right off the bat I was impressed with the beautiful texture and marbled and the clear white color of the fat. But we still had to taste it, but by then I was sure it would be really nice.

Time to get our hands dirty, and we called some beef-loving friends, set up a huge table with several side dishes and got to work. I cooked a roast beef with parts of a filet mignon and, with the rest, Lara prepared a perfect steak tartare that you can check out on Sem Medida, finely diced with a sharp knife. Then we cooked an oxtail soup with watercress and scallions, with one of the flank steaks we devised a stew and a burger (also knife-diced) served with a béarnaise sauce. I roasted half of the ribeye steak in a frying pan, covered it with beurre noisette, and we grilled the other half, as well as the short rib, prime rib, top sirloin cap and tri-tip on the barbecue.

With the table set, it was time to start eating. When I put the first piece in my mouth (for my first impression I went with my favorite one, the short rib, just like Uruguay’s). I went nuts with the juiciness, the intense flavor sweetened by the fat and also by the right amount of toughness in the fibers… When I reached the connecting tissue (another tasty treat) I was sold and craving for more. And so it went, beef cut after beef cut. I was impressed by how different they were in relation to the meat I’m used to, especially how light they are, and so happy to have found such good beef so far from Uruguay.

By then my friend had a sly satisfied smile on his face… and so the night followed with sighs of satisfaction and deep silences as everyone surrendered body and soul to the delights of a lavish meal. 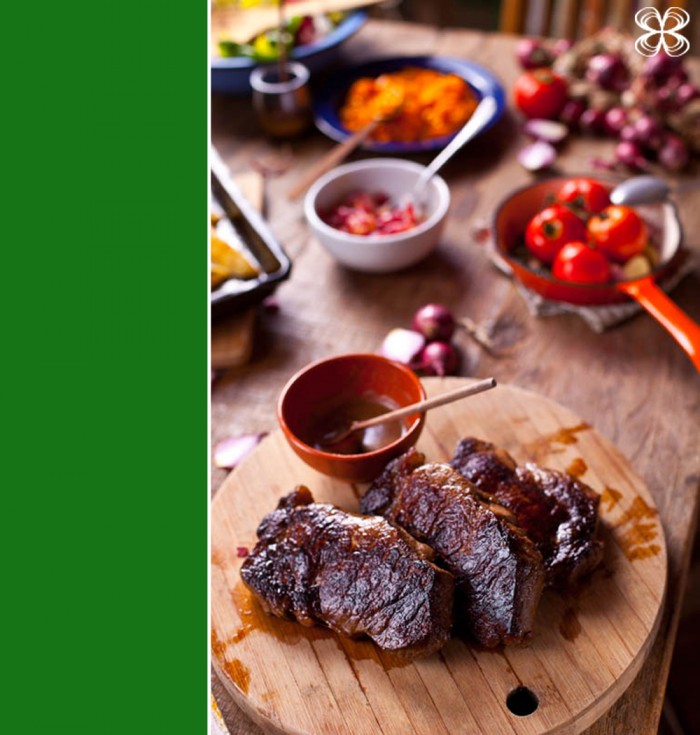 Obviously, Lara and I wanted to know everything there was to know about the product, and how they were able to achieve such high quality. And here’s what we found:

Bonsmara is a cattle breed developed in South Africa around 1937, by an animal scientist called Jan Bonsma who, by request of the government, began a series of breed crossings of a native breed, the Afrikaner cattle, with European breeds, in order to develop cattle that were more resistant to tropical climate with greater productivity. The whole process, carried out at Mara experimental research station, originated an animal that was 5/8 Afrikaner (Sanga), 3/16 Hereford and 3/16 Shorthorn (British Taurine), the only beef cattle developed by science, Bonsmara.

Up until 1994, it was restricted to South Africa, which at the time was inaccessible due to the Apartheid. In 1997, the first embryos arrived in Brazil. In 2000, a breeder’s association was founded. In 2008 a smaller group of only five producers decided to delve into the Bonsmara breeding system to work on the quality of the livestock. For 4 years they performed a series of researches in feeding, subdividing the herd in smaller groups, each with different types of food, until they reached the ideal flavor and marbling that set the product apart. What makes them different from the conventional farmers? 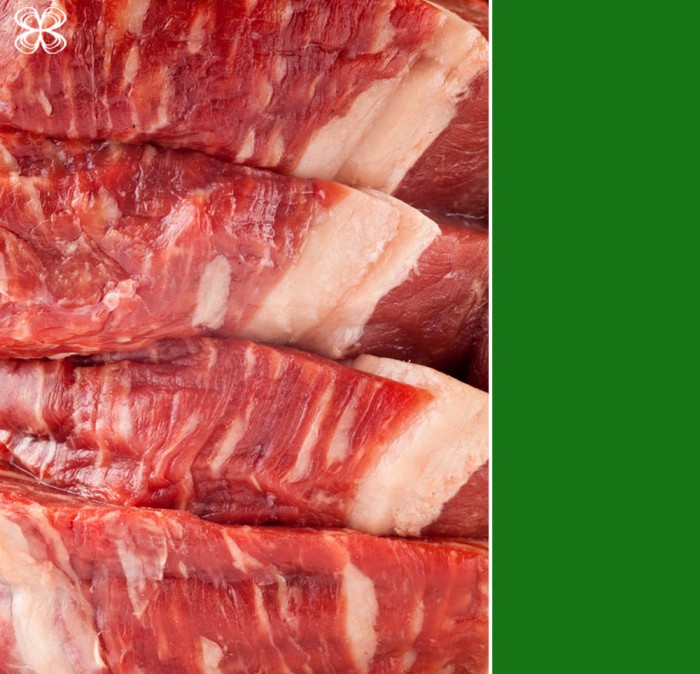 1 – Herds are small, most of them bred in small farms. Annual production is really small, around 2,500 units (almost nothing when compared to the 200 million cattle units in Brazil).

2 – Every animal is genetically mapped, and the lineage is recorded.

3 – In the traditional system, only 9% of the herd receives corn as food supplement (which assures the marbling) and even so, only in the last 2 months of their lives. This causes the animal to develop an external fat layer, which in general has a yellow color to it and does not soften during cooking. For the Bonsmara, corn is introduced for 100% of the herd at a very early stage, which ensures a meat streaked with clear fat and not only in an external layer.

4 – Bonsmara cattle are culled with at least 24 months (when the average is around 26 to 28 months, depending on the size of the animal), against 18 months for conventional breeds.

I worked once as an intern at a butcher shop, so I loved to get to know the production process of this high quality meat. But I digress… Let’s cook!

The feast, of course, turned into blog posts both here and on Sem Medida, with the recipes of the day and beautiful photos from my dear Luis Simione (who participated in the tasting and took the pictures). 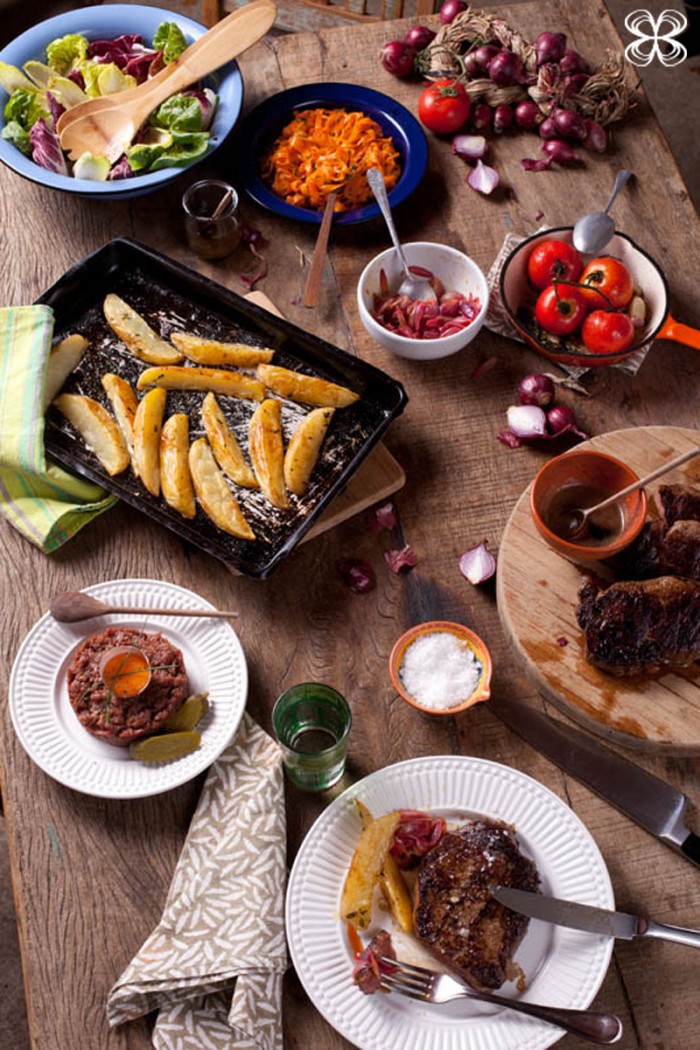 When Lara and I divided the cuts and decided who was entitled to which preparation, I immediately thought I should prepare one of the cuts on the stove, finishing it with beurre noisette, which I love. And when I looked at the ribeye steak’s beautiful fat marbling, I decided that it would be the one. Since the idea was to test the product and see how it came out in different preparations, I cut it in half and sent one of them to the grill and the other to the griddle.

The ribeye steak is a very special cut because it is so soft and flavorful, as Larissa explains on Sem Medida. And there’s a golden rule here: everything that’s flavorful gets even better when bathed in browned butter. It’s that simple… and that’s what I did. 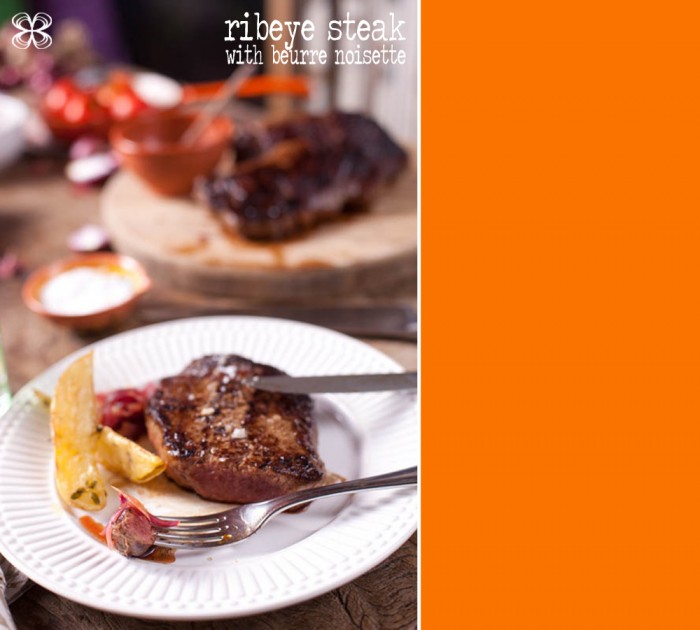 Another thing, which goes not only for the ribeye steak, but for every piece of meat you cook: we only added salt to the meat after it was ready (and not too much of it). Only at the finishing touches did we sprinkle the dishes with fleur de sel, making sure that the beef wasn’t hardened or lost its juices due to the dehydration the salt causes.

1/2 a stick of unsalted butter

This is one of those simple instructions that requires a good eye from the cook, so we photographed the step-by-step to make it easier to understand.

Start with the beurre noisette. Melt the half stick of butter on a frying pan on low heat, delicately stirring until the white and solid parts of the milk darken and turn to a golden/light brown color with a nutty taste.

Set it aside and in the same warm frying pan “dirty” with butter, set both steaks. Let them brown for 2.5 minutes on each side (use your timer). This will make them dark and crunchy on the outside.

Now for the dressing: generously pour the darkened butter on both sides of the steaks so they look like this: shiny, glass-like… not to mention the flavor…

Before serving, let the meat rest for 5 minutes so the juices can sit and stay put when cutting.

Sprinkle some fleur de sel and voilà: to the fork! 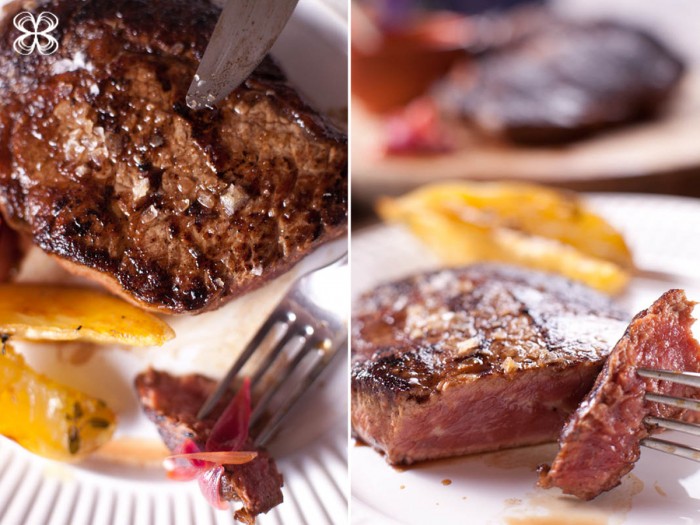 That’s the recipe for today, but in the next posts we’ll post here and at Sem Medida the recipes for the side dishes.

PS: This was not a sponsored post, I was actually excited about the product and felt like sharing it with friends and readers!

Since this is a meaty subject, and what a meat, I’ve decided to pair the ribeye steak with beurre noisette with an Uruguayan wine. But not the obvious pairing of Uruguayan Tannat, ultra tannic, even harsh, with grilled beef. Besides being super soft, juicy and flavorful, the beef even comes with the buttery and nutty flavor of the beurre noisette.

So I suggested a wine from Bodegas Bouza, actually their best wine, the red Monte Vide Eu, with 50% Tannat grapes (the most typical Uruguayan grape), 30% Merlot and 20% Tempranillo, manually harvested, and turned into wine and aged separately. They spend between 10 and 16 months in French and American Oak casks and the result is excellent: a powerful wine, tannic, but to a less aggressive degree, well balanced, which fits perfectly with today’s ribeye steak recipe.

It won’t let you down and the price, back in Uruguay, is not at all steep, but honest and with a great cost-benefit. To buy one, it is well worth the trip to Montevideo and a visit to the Bodega, where you’ll taste and have an excellent lunch of Uruguayan asados, of course. You wanna know what’s even better? The total price of the visit, including the taxi ride from downtown Montevideo to Bodega Bouza, will cost you around US$ 135.00 (US$ 15.00 for the fare). I haven’t been there yet, but my buddies Guilherme and José Paulo (the latter went after I told him to) have and loved the ride, the wines and the food.

In Brazil it is imported by Decanter, but the price is a little steeper, around R$ 200.00 (about US$ 100.00 at the time of writing of this post). But a special meat requires a special wine! Cheers!

I really love Uruguay. I had good times there, and Patrícia, one of my best friends, lives in this country where their president donates 90% of his wages, every children from public schools have received a computer from the government and it is leading in the number of bookshops. But this is not a post about Brazil’s neighboring country, but the fact is, even as the fishtarian that I am, I’m very happy to make an exception when I get there. I have all my meals at El Palenque, which, besides having incredible beef dishes, has the best tortilla in the whole country.

So when the topic is meat, Uruguay immediately comes to my mind. And a tango follows. I know, I know, everyone instinctively thinks of Argentina when we say tango, but the Uruguayans swear that tango is platense, that is, from the Plata river area.

And Malena Muyala sings tangos, waltzes and milongas. She’s beautiful, young and an activist (she’s a feminist militant). We were so lucky to watch one of her shows in 2009 at the gorgeous Teatro Sólis. Hear how delightful the song Miente is.

Keeping to the platense and tango rhythm, I recommend, when at a huge table with all your friends overindulging on food, playing some Bajofondo. It was well known in Brazil for being a theme song for soap operas, but the thing is that, with their electrotango, they brought some freshness to the genre. They sample Astor Piazzola, Alfredo Zitarrosa, and so on. When I listen to their electronic beats mixed with Latin roots, I feel transported to the urban lifestyle of Montevideo.

And the group of Argentinians and Uruguayans consists of a DJ, violinist, bandoneonist, bassist, percussionist, and even a VJ. On top of all that, they are engaged in politics and so cool.

My choice of song is Ya No Duele, with its heartbroken lyrics.

I’m so glad I chose Uruguay for my retirement!