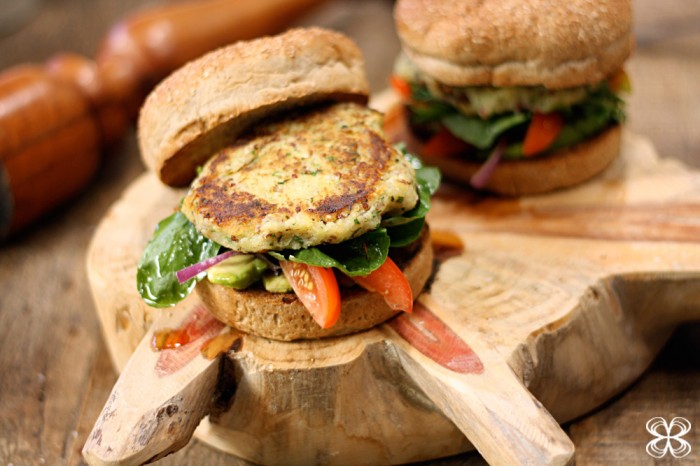 The weekend was productive, I took advantage that Marcelo was on duty on Sunday morning and dedicated an entire session for vegans!

I photographed three dishes: two kibes ( you will not believe, wait and see!) and this burger here that was the star of the vegetarian food class. They liked it so much that I thought it was very inconsiderate not to share it with you.

I Like all the vegetarian dishes that I do, I didn’t use soy meat: when I was thinking of how to do the burger for the class, I decided that I would do a mix of root/ tuber with some grain. I chose sweet potato, which I love, and as the potatoes are from Peru, quinoa was an obvious choice to join the dance. I seasoned all with pepper, onion and parsley and the result was an excellent mixture which I also tried as fried dumplings and it worked out. Super versatile, easy to do and tastes good in one way or another!

To serve the burger I added red onion, baby watercress ( because of the bitter) and also avocado, which replaces the mayonnaise with honors and much more flavor, as I have already explained on the Hot Burger recipe. 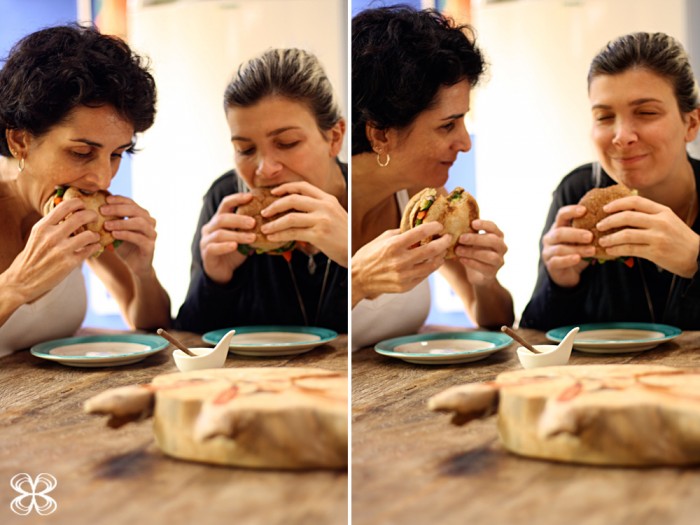 Working over the weekend has its rewards; I had the delightful company of dears Valéria Pandjardjian and Joana Dambrós who helped carry the piano, were testers and also photographed all the making off of the session, a novelty that you can take a look at the end of the recipe (and from now on will be in the most part of the posts).

Having said that, let’s go to the recipe? 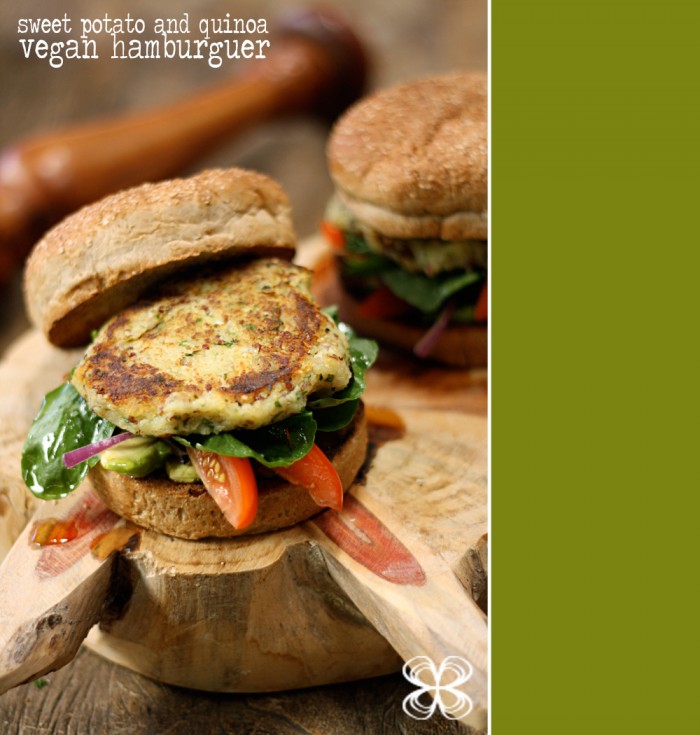 Bake the sweet potato in the conventional oven, covered with aluminum foil until it has softened (about 30 minutes on the preheated oven). The potato can also be boiled, but the problem is that boiled, it gets it moist and might disrupt the mixture. One solution for this problem is pre-boiled unpeeled the potatoes and then bake it for 5 minutes so it will be well dried.

Just mash the pulp with a fork (the potatoes will form a harder crust outside, use only the crumb, which is softer ).

Model the burgers with your hands with about two fingers thick each.

Warm a non stick frying pan and lightly brown the loaves. Put aside.

Brush the pan with some olive oil and brown the burger on both sides, (1 minute each), turning carefully with the help of a spatula. 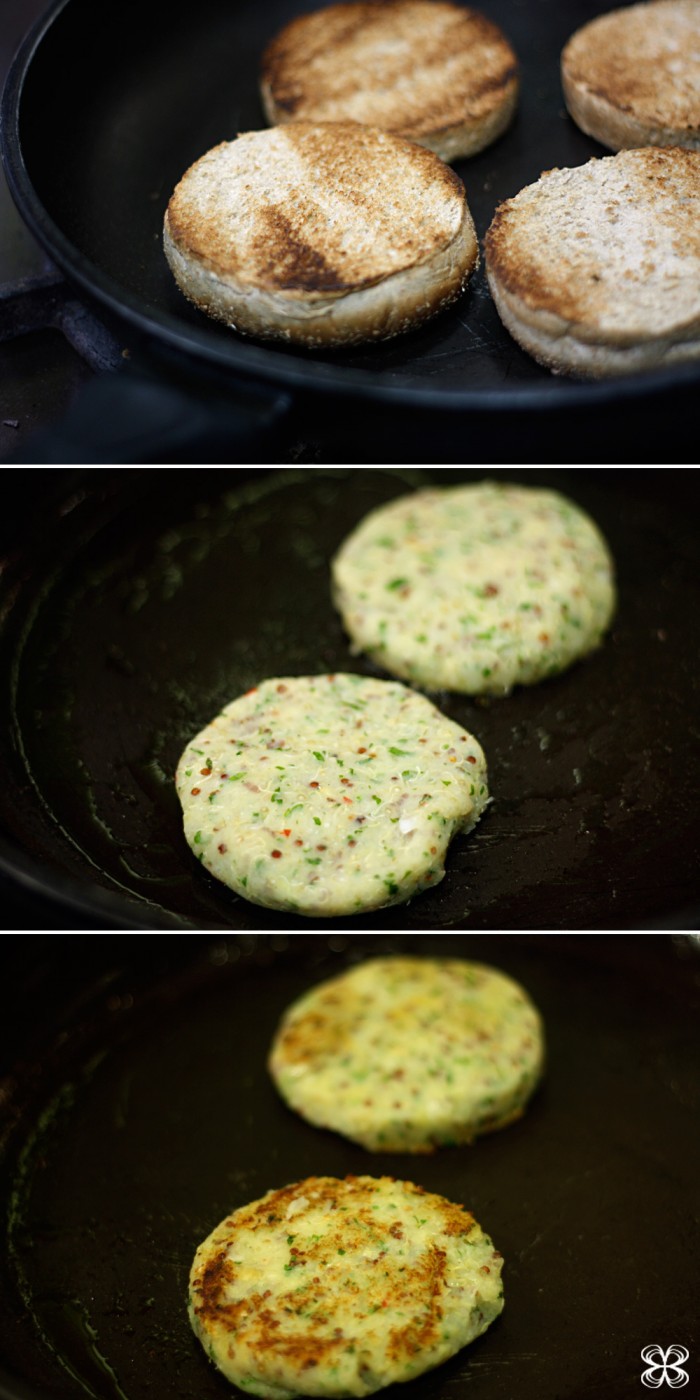 I like to serve it just with strong yellow mustard. It’s perfect.

Liked it? Then you can invite vegan friends to a feast of burgers! :)

As the wave today is vegan, natural and healthy, I will recommend two beers, one is organic and the other a live beer. The organic one is Eisenbahn Pilsen Natural, the first and only Brazilian beer with the IBD seal (Biodynamics Institute) which certifies organic products in Brazil. This means that it is produced only with ingredients that are free of agrochemicals, fertilizers and non natural chemical additives throughout the production chain. It is a light pilsen, with good carbonation, golden color, nice flavor, slightly bitter, in other worlds, quite easy for the Brazilian taste.

The live beer is “Coruja Viva”, from Rio Grande do Suli, which does not go through filtration and pasteurization processes. Therefore has live yeast. And Because it is not pasteurized, it is more perishable than the industrialized beers, exactly like homemade and artisanal ones, which is so trendy nowadays. As it’s not filtered, it has a more intense golden color and it’s cloudy such as wheat Weiss beers. It also has a marked bitterness due to the higher content of hops and an intense flavor, which is pleasant for those who appreciate a beer with more personality. Such beer is brewed with twice as barley malt as the common pilsens, without the addition of unmalted cereals such as rice or corn. In other words, it is a more serious beer.

We can find both at the grocery store here in Vila Madalenaii, but the beer “Coruja Viva” is a little bit difficult to find. It is worth looking at emporiums and specialty stores: since it is perishable, it must be stored with more care than that of a common grocery shelf. That’s it, man! Salute!

Even as a vegetarian, I tend to salivate with recipes which use meat, so I could only imagine how much will I salivate with this burger with Sweet Potato and Quinoa. Lanchonete da Cidade and so forth lose by far and away!

As it is a delicious variation on a theme, I suggest to listen to a song that is very good in its original form and also very good in two other versions.

Barato Total, from Gilberto Gil, is a song that I wish I had written in my adolescence. That time, when the emotions were in greater than usual, I remember I thought it was very unfair that sad moments lasted longer than the happy moments.

Until the day I was listening to the extinct Musical FM (105,7 Mhz, remember?!)iii and they played a version with Zizi Possi. So obvious!, “quando a gente tá contente/ nem pensar que está contente” (freely translated: when we are happy/ we don’t even think that we are happy). That’s why it seemed to last less, because: “A gente quer/ Nem pensar a gente quer/ A gente quer é viver” (freely translated.: when we want/ not even think we want/ we want to live).

Half of my problems had just finished that moment! I told my mother, João Paulo, Geórgia…it turned my hit of 1994!

When I was studying at PUC, the hostel where I lived stopped just to watch Gal Costa’s Acoustic from MtV. a super repertory: “Paula e Bebeto”, “Camisa Amarela”(among others, because otherwise I’m going to talk the entire disc) AND “Barato Total”.

But the first time she recorded was in the fantastic disc “Cantar”in 1974 ( which also has “Flor de Maracujá”, from João Donato, just to name one song), and was the first track of side A.

The “Nação Zumbi”recorded (among with Gal Costa) in 2004, and many other people also did it.

As it is timeless, it’s going to last for long. As long as being around the table with de@r friends on a Sunday, not realizing that we are happy, because what we want is to live!

i Rio Grande do Sul – State on the Brazilian Southern Region