After an enthusiastic explanation about the wonders of bamboo steamer , I schedule a little lesson with Felipe Simões on how to use this versatile utensil. While I was cooking and explaining, he photographed most of the step by step, and the lesson turn into post that I wanted to talk about it here for a long time ago. 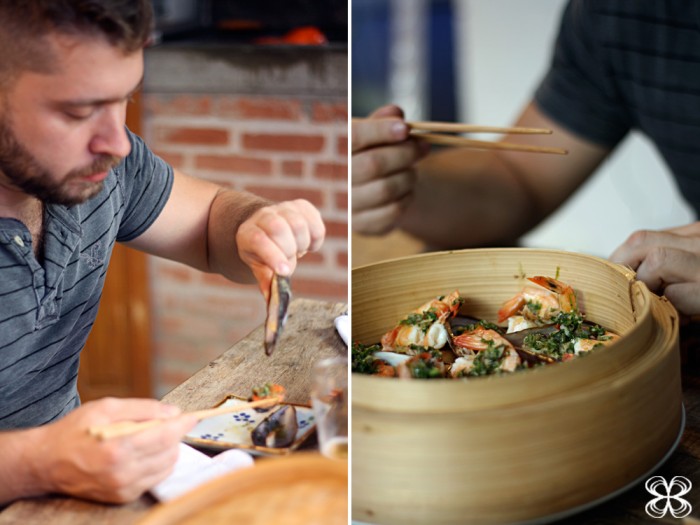 I am a big fan of bamboo steamers; besides being gorgeous, they are versatile, easy to use and, always make a very healthy food as they steam. They give a special flavor to foods through the smell of wood impregnated during cooking. Also, they are inexpensive ( the big ones cost around R$50,00 in the stores of Liberdade*).

They are among my favorite tools in the kitchen. This is so true that I have two of them and now and then I cook with those and they will go straight to the table: just put a plate or platter underneath it to prevent from dripping, and distribute chopsticks to the guests so they pick up food straight from the source!

To show Felipe how to use them, I set one “floor”of vegetables and other of seafoods. I made a super simple sauce with herbs I had at home + tangerine zest, olive oil and flower of salt. Then I served it, as simple as that, with a company of a beer as the day was hot and asked for some refreshment. He love it!

You can find another nice post about bamboo steamer at “Cozinha da Ceci”, from my dear friend Cecília Santos. 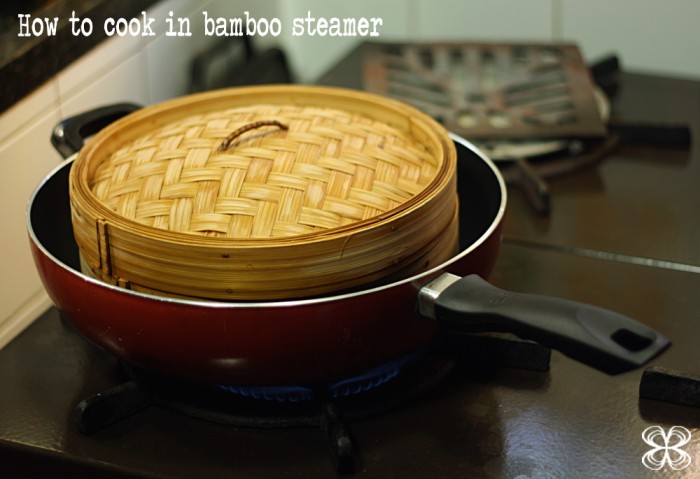 1- Arrange the ingredients that you want to steaming dividing them by the “floors” of the pan. The idea is to put together ingredients with the same cooking time, as I did, putting vegetables on one floor and seafood in another. 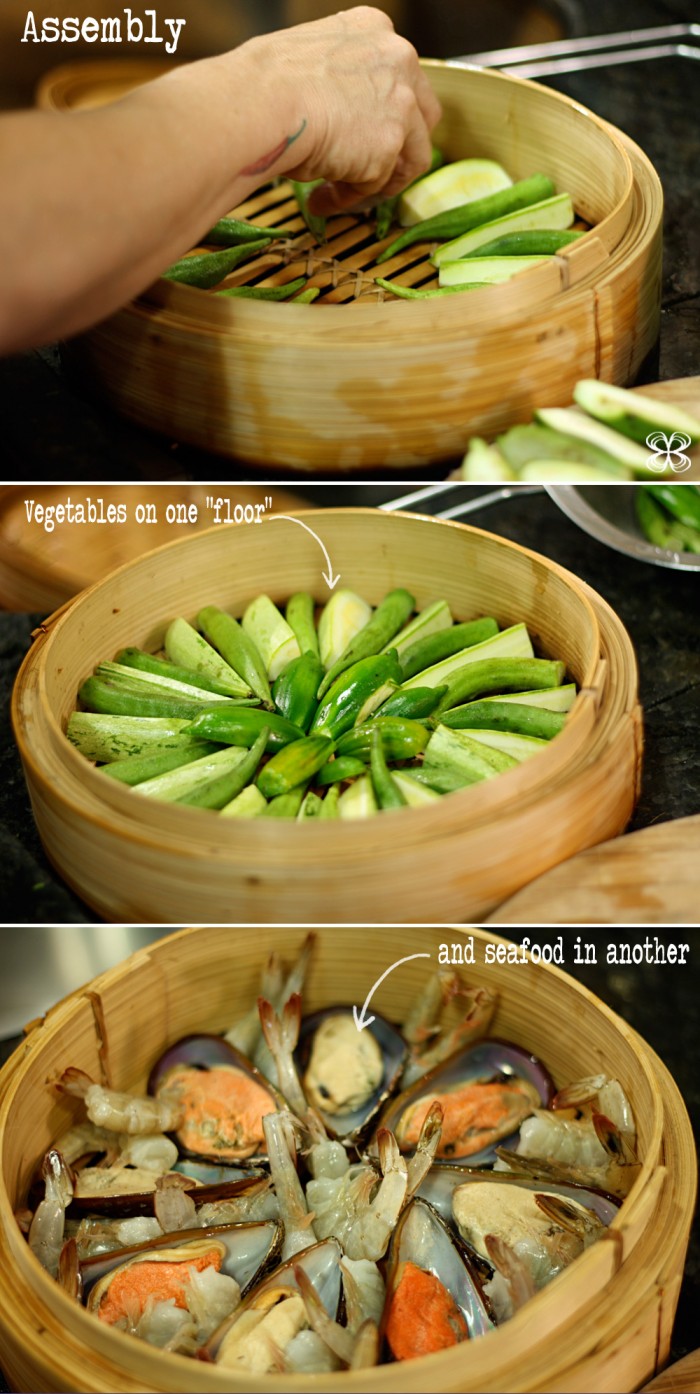 2- One important tip is just put one layer of the ingredient at the bottom of each floor and not piling ingredients which would end up cooked unevenly and undesirable.

3- In one large pan ( I always use my wok or a non stick frying pan, both large) put about two finger long of water and some aromatic herbs. Cook on low heat.

4- When it starts to form bubbles, arrange the bamboo steamer on the water, starting at the “floor” with the ingredients which cooking time is longer – in this case, I started with the vegetables, which take took about 10 minutes to get ready. Cover the pan. 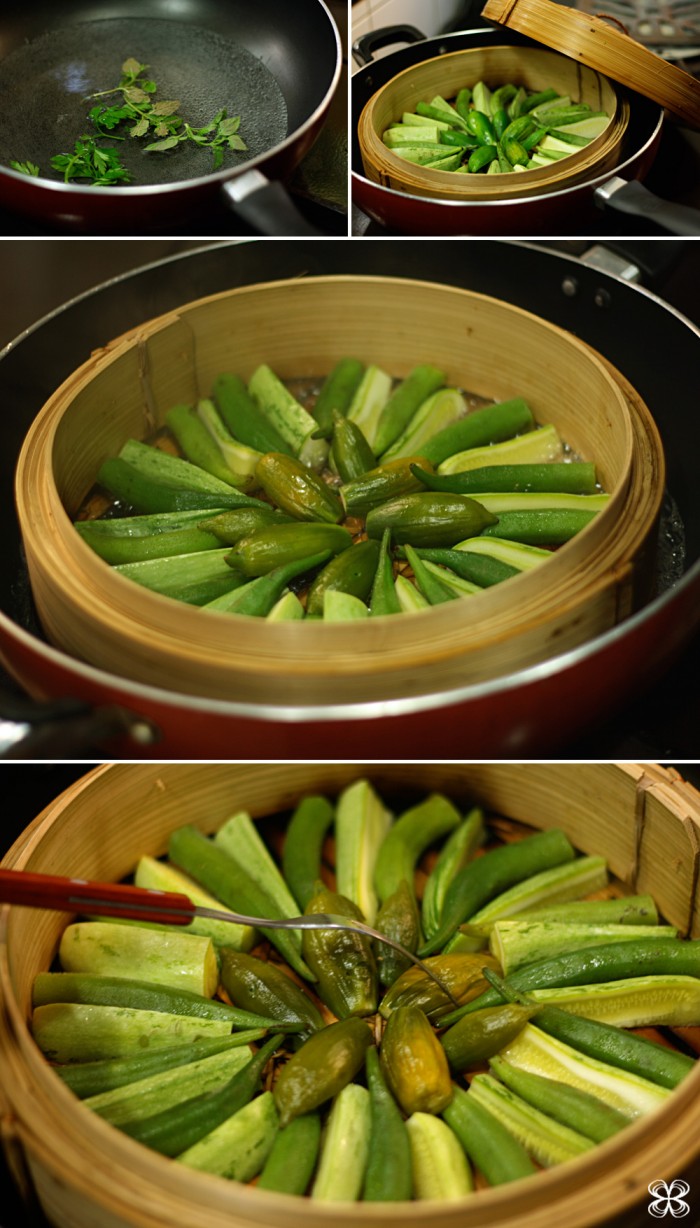 5- When they are nearly ready, which you can check with a fork, add the second floor with seafoods, since this last ones cook very fast – 3 to 5 minutes are more than enough.

6- Throughout cooking, keep an eye on the volume of water in the pan by replenishing if necessary. If the water dri es out, you run the risk of burning the pan.

7- Remove it from the heat and take it straight to the table, dipping ingredients with the sauce of your choice. 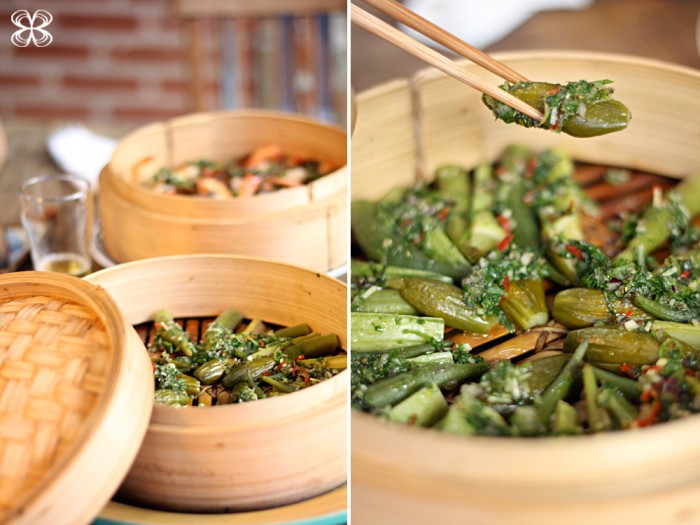 What to cook in the bamboo steamer?

9- Any ingredient that you steams can be cooked in the bamboo steamer. The most common ones are fish, seafood and vegetables. 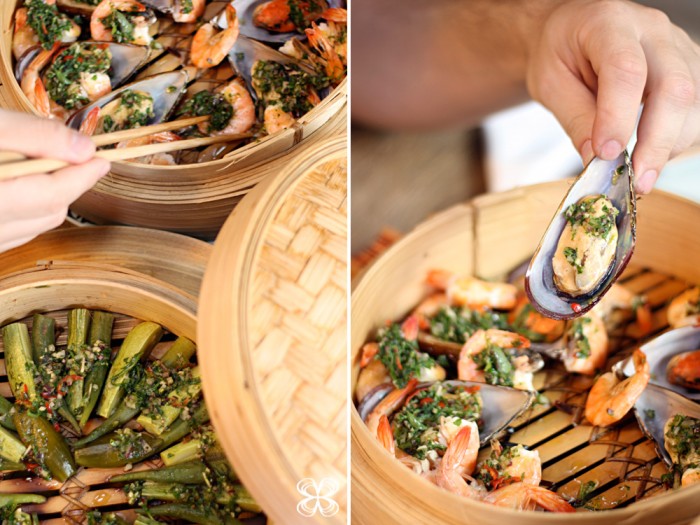 10- In Japan is usual to cook rice in the bamboo steamer. For this, you should line the pan with a thin and moist dishcloth and on top of it and place the rice already moistened. In general, the rice is ready in 30 minutes.

Tips on how to take care your bamboo steamer

11- If you enjoy sea food like me, it is better have two bamboo steamers. Because no matter what you do ( there are people that lines inside the pan with aluminum foil), the bamboo will be impregnated with the smell of seafood which will rub off on other preparations. So have two and mark the one you use for seafood, thus avoiding the mixture of flavors.

12- Wash it well with a brush after using the pan and let it dry in the sun, or in a turned off hot oven. This is an important step for you to prevent your pan from becoming moldy.

13- After drying, keep your pan in a bag or plastic bag to avoid gathering dust and getting smells. 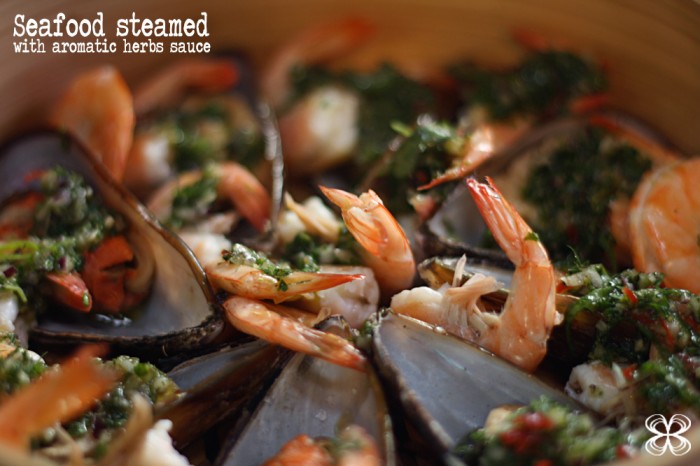 And, as I said, two recipes follow this technique…the first one with vegetables and the second one with seafood. I served both with the same sauce, but I will take advantage of the post to teach two different sauces.

Dispose seafoods on bamboo steamer, and sprinkle with salt flower.

Take a large pan to the fire with two finger of water and a handful of herbs. When the water begins to boil, arrange the covered bamboo steamer on the water. Set the timer for 4 minutes. When the time comes, turn off the fire and drizzle with a sauce of your choice and serve immediately.

I love the dammed okra and scarlet eggplant, so I used both plus zucchini that I had at home. It is delicious with eggplant ( especially the baby ones), chayote, gherkin, broccoli, brussels sprouts…well, looks good with almost anything, just think of the cooking time of each ingredient to make your favorite blend. 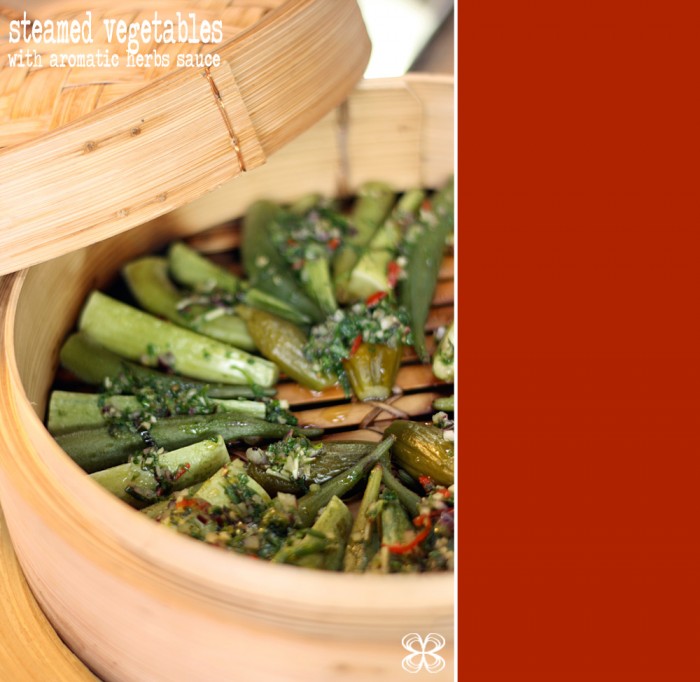 Dispose the vegetables in bamboo steamer and sprinkle with salt flower.

Take a large pan to the fire with two finger of water and a handful of herbs. When the water begins

to boil, arrange the covered bamboo steamer with the vegetables on the water. Set the timer for 10

minutes. Test it with a fork to see if they are tender…if so, they are ready. Just drizzle with a sauce

of your choice and serve it immediately.

mix in a bowl:

mix in a bowl:

As the chef already gave the cue, for steamed seafood I will suggest a Belgian beer, the Affligem Blond. It is a kind of Abadia ale beer, very round, with alcoholic content of 6.8%, very aromatic with still bitterness. It goes well with delicate dishes such as seafood and steamed vegetables, but neither overshadows nor disappears before aromatic herbs and pepper sauces.

Another option is the Eisenbahn 5, a commemorative edition of amber ale, made by Santa Catarina** brewery. It is produced by dry-hoping method, a second addition of hops during maturation, which gives a more aromatic character to the beer. Although the beer is harmonized with meat in the Eisenbahn site, I do not think this beer has structure for this purpose, but it goes well with spicy andaromatic sauces.

And for those who think the Eisenbahn is no longer artisanal, especially after being bought by larger groups, I found it very honest and very cost/benefit. Salute!

From these wonders that you can do with bamboo steamer, I remembered a guy who does wonders with many rhythms: Mulatu Astatke.

Ethiopian, composer, arranger and instrumentalist, took jazz, mixed with salsa, funk and created a personal and sophisticated sound. I have heard call him ethio-jazz and also african-latin soul.

While vegetables and/or seafood are cooking and you are preparing the sauce, listen Yèrkèmo Sew and then Emnete.

Eggplant with garlic and mint